Can a Will override my insurance nomination(s) and vice versa?

Before anything, you will need to check:

For trust nominations (sometimes also referred to as an irrevocable nominations), a Will cannot override it. 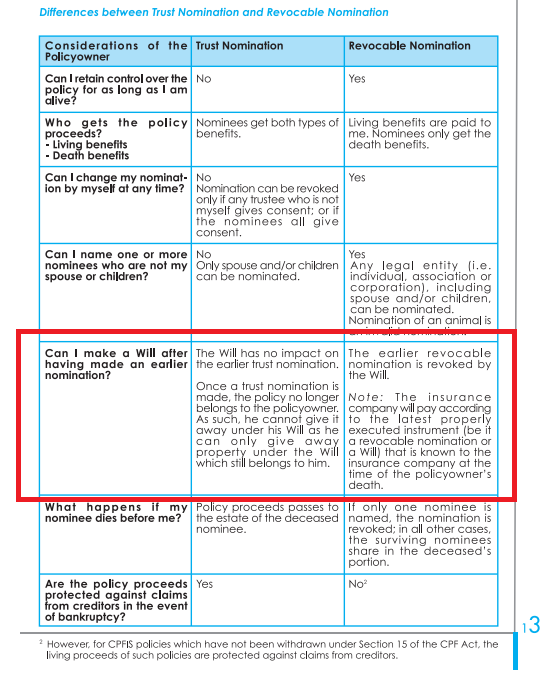 Do note that the money does not automatically belong to whoever the insurer pays it to. For example, if an insurer only knows about the revocable nomination that was submitted but has no clue that a Will exists which was signed at a later date (and specifically written to override that revocable insurance nomination), the insurer may pay out the money to the nominees according to the revocable nomination. However, the money would still belong to the beneficiaries according to the Will and not the insurance nominees (barring any other special terms written in the Will and/or the insurance policy/nomination form).

Please also note that according to the Insurance Act,  there is a specific way you need to draft a Will for it to override a revocable nomination. For example,  the particulars of the relevant insurer's name and policy number, the new beneficiary’s name, NRIC, address, date of birth and their allocated portion of the death benefits (which has to add up to 100%) must ALL be specified in the Will in order to revoke that revocable nomination (See Insurance Act s49M(7b) and Insurance Nomination s5(3)).

You can see how it might be easier to just fill up a new insurance nomination form (or the revocation form) than to write a Will to override your revocable nomination.

Additionally, while your respective insurance companies do know of your insurance nominations (since it is done through them), they do not automatically know if you have written a Will to give their policy to a different person. This can potentially lead to disputes down the road.

Insurance nominations have their benefits and purposes, which we do not want our Will to conflict with. Your Financial Adviser can probably explain this better than us.

This is why specifically in our platform, we have a clause stating that all interest, benefits and net proceeds of all insurance policies shall be distributed to the person(s) nominated in the said policies REGARDLESS whether the nominations were made earlier or later. Of course, this means that if you have not made any nominations, then it will be distributed according to your Will like any other assets.

If you have a nomination but want the distribution of your policies to follow your Will made in getArrange.com instead, you will need to REVOKE the previous nominations.

Did this answer your question? Thanks for the feedback There was a problem submitting your feedback. Please try again later.